This week’s blog post is by Brighton-based musician, Chris T-T, and was originally published on his website. In it, he examines the ongoing issue of the lack of diversity in festival line-ups and recommends looking further down the bill to better assess the future ‘direction of travel’ for gender diversity at festivals. Note that the original article was originally posted on 26 June 2015 and the stats may have changed in the interim.

The current debates around gender bias in live music, specifically festival lineups, are important but I think people are focused too closely on big names and headliners. We’d learn a ton more by looking at smaller stages and events aimed at ’emerging artists’. I’ve done two quick bits of number crunching in that area, at The Great Escape and BBC Introducing, to see how they shape up…

It’s true, responses from festival managements feel badly clumsy and out-dated. But we ought to acknowledge a reality: just a tiny handful of bands and artists worldwide can headline big festivals. They’re booked through a complex, confrontational process of individual negotiation (and at the back end of a long, often multi-decade, career of growth). In a fundamental way, the top of the bill at a big festival is the past. Booking it is capitalism at its rawest and we – audience – almost never know what’s gone on behind the scenes to determine who plays.*

The more I think about it, the more I’m convinced that the top end of a festival lineup isn’t the place to learn anything real about gender (or ethnicity, or any other social balance) in the live music world. The place to look is: 1) much further down the bill and 2) at ’emerging artist’ conferences like SXSW, CMJ and The Great Escape.

If we focus on – and take our data from – the small slots, on smaller stages, where early breaks happen, we’ll surely make better assessments; not just about biases but also about the direction of travel for live music more broadly. Two clear reasons for this:

First, that’s where the future is, down the bottom of the bill. It’s where we build a picture of what the live diaspora will look like in the years to come.

Second, that’s where bookers and agents don’t solely book ‘responsively’ to maximise audience; there they have flexibility as gatekeepers to choose talents to nurture.

If we take the debate there, we get greater leverage and more immediately visible outcomes.

To that end, I’ve had a quick (amateur) go at grabbing some data. First, I took the lineup of Great Escape Festival 2015 and divvied up all the artists by gender, to the best of my ability. **

Across all acts performing, I found approximately 62% male, 18% female and 19% mixed. Nothing approaching equality BUT a far better stat than the big outdoor summer festivals, where the overall average is 85%+ male. This is important because The Great Escape (TGE) is specifically an event to showcase new artists to the industry and help them make deals.

It’s worth noting that groups in my ‘mixed’ category (containing members of more than one gender) are still vastly male dominated. Also, defining a ‘band’ as having 3+ members, I could find only five all-female bands at TGE; Jagaara, Pins, Baby Queens, Little May and M.o. (plus I’ll mention Novella has four women and a male drummer and is led by a female core trio). Sorry if I missed any out, I was careful. That is not much more than 1% and chimes with our instinct about the severely low number of all-woman bands out there.

The data also highlights an unrelated trend, maybe worth a separate blog entry: the collapse in numbers of conventional bands (again, of 3+ members, whatever the gender, or genre) versus duos and solo artists. The rise of pop, acoustic and electronica, versus rock and indie. I’d love to find enough data elsewhere to assess the extent to which the improving gender balance (and overall diversity) mirrors the genre shifts away from conventional rock. Incidentally, TGE 2015’s headliner balance was also impressively equal-ish (even the big names at TGE are not world-dominators, they tend to be still breakthrough artists in a global sense): of three headliners, one was Kate Tempest and another was Alabama Shakes.

Another place to focus on is the BBC Introducing Stage (not to give anti-Beeb ranters ammunition), now ubiquitous at so many UK summer festivals. BBC Introducing specifically eliminates the coalface of the free market from the search for talent, with a free-to-submit public entry system and empowerment of local BBC music ‘experts’ to highlight talent in their region. Much more of a loose ‘public arts’ model, applied to rocknroll. It does sometimes feel like the UK live scene has outsourced their entire A&R process to the Beeb, or like they’ve built a chainstore iteration of the good old ‘new band stage’.

However I actually like this a lot; in theory the freedom from the bottom line enables focus on diversity and access, if they wish, with no perceived responsibility to bring audience numbers, as the BBC Introducing Stage is (A) booked by the BBC, not the host festival and (B) has a specific remit to introduce new talent. It is a system that locks out the confrontational agent/promoter relationship (or at least, pays lip service to doing so) and starts helping artists often before they have a ‘team’ behind them. Certainly BBC Introducing is a powerful key live gatekeeper for emerging artists, just ask Ed Sheeran and George Ezra. But this is crucial: I’m arguing BBC Introducing should be much closer to parity.

Here’s the BBC Introducing lineup of 25 acts at Glastonbury Festival 2015 (getting underway right now, as I type). 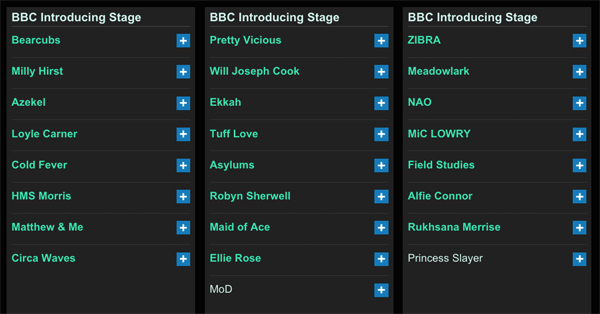 25 artists. I make it 56% male acts. I appreciate it’s just one lineup at one festival – but still, a significant improvement on stats the debate has thrown out so far. Of female artists, only one is an all-girl band, terrific Hastings punk sisters Maid Of Ace. Also note the sheer weight of pop/hip hop/R&B versus conventional festival indie. Again, it’s changed as much as (again perhaps in line with) the gender and ethnicity improvements.

(by the way, off topic but how odd that just two acts, MoD and Princess Slayer, won’t get broadcast on the live webstream. Presumably logistics but I feel a bit sorry for them!)

I believe, if the BBC Introducing team is keeping decent statistics (or even raw lineup lists) from across everything they’ve organised over the past few years, there’s some incredibly useful data to be dug out about how the live music diaspora is changing – and more importantly will continue to change. A few months ago, someone online mentioned that the BBC has records not just of bookings but of every act that ever submitted to BBC Introducing via the online entry system. They mentioned it in the context that they apparently know that the number of bands (as opposed to duos or solo acts) is in a state of collapse. (as I said earlier, that’s another long blog entry)

For now, just imagine if we can compare gender, ethnicity, perhaps class, social background, perhaps setting those against musical genre, of every single UK act submitting to BBC Introducing and measure how it is shifting over the past half-decade. I’d LOVE to get a nose at that hugely powerful data set. Maybe (hopefully) someone over there at Auntie is already doing something with it.

I think, if a large festival still has an overall poor gender bias – but can demonstrate that at breakthrough level it offers a much better proportion of slots to acts that aren’t entirely made up of white men, then it has a fairer defence that the broader issue is industry-wide, rather than endemic to its own booking policies. And I also think, if we’re judging, we need to more clearly identify the true entry-level gatekeepers to the UK’s live music scene and challenge them to reflect the diversity banging on the door.

** Please note, this was just me, working on my own, using the advertised lineup. I went through almost 400 billed artists, so I’m not claiming it’s a perfect analysis. I reckon for a +/- 3% error rate. I also didn’t include the Alternative Escape, which tends to be more rock-oriented, so might’ve skewed the male bias up more. I say “might”. But it was just too many extra artists and far less clearly listed. Also there’s a pile of missing data in the blurring between ‘band’ and ‘solo artist plus backing band’ because it’s rare that backing musicians are included in the lineup listing, or press information. I’m watching Matthew & Me on BBC Introducing at Glastonbury live feed right now and I’ve marked him as billed; a male songwriter – however he has a band, he says “we are…” and his keyboard player and drummer are both women, so if they were marketed slightly differently it would’ve (even more) positively affected the BBC Introducing results.

* Agents and bookers fight tooth and nail over those lineups. They’re not sitting down working out how to make themselves look progressive, their financial bottom lines are terrifying. We don’t know why Taylor Swift didn’t headline Glastonbury, or why she was billed (with reduced production) to go onstage before Foo Fighters at Radio 1’s Big Weekend (to the point that Grohl himself pondered bemused onstage about the order). We don’t know why Fleetwood Mac didn’t end up doing Glasto, as rumoured. We don’t know why, when Paramore headlined Reading and Leeds a couple of years ago, they had to co-headline with QOTSA, rather than getting the billing to themselves. We do know that at the height of her fame, Adele, for example, decided not to play festivals at all – to the huge, public chagrin of major promoters. We can make a vague analysis of why so few British artists gained enough long-term longevity in recent years to headline alongside the American legends. But it’s just that: a vague analysis (hint: only poshos get a shot these days). Anyway I digress.

Chris T-T retired from making and touring music in May 2017 to focus on other projects. Other writings from Chris can be found here.

This site is a space for comment and discussion. Please refrain from promotional activities such as advertising gigs or releases, offers of free downloads or similar. Any spam activity will be removed from the site.