Today’s post is adapted from a presentation by Professor Rajko Muršič of the University of Ljubljana to the Radical Anthropology Group. It discusses the communal efforts and work practices of venues in Slovenia and their capacity to act as spaces of resistance.

The video of the original presentation is also available below:

We live in deeply paradoxical times. Everybody has access to more music than ever, but at the same time music is becoming less and less powerful as a social activity. Music – especially popular music – does still affect society, but not the way it did decades ago. All around the western world, music venues are rapidly disappearing or barely surviving at the margins. Pocket loudspeakers occasionally disturb social “peace”, but earphones seem to inscribe definite symbolic boundaries in everyday reality, at home and in public.

Still, music’s basic appeal has not changed, with it being the most effective symbolic practice that catches both the whole body and the mind. It is essentially intimate, social and common at the same time. Live music will not disappear so easily.

In this short post I will present some thoughts related to continuous encounters with various music venues in Slovenia in several capacities – as part of the audience, as an active participant in the establishment and short-term operation of such a venue, as a musician, and, finally, as a researcher. In the 1990s I studied the Rock and Youth Club in the Slovenian village of Trate, which eventually became a dissertation-based monograph.

Two decades later, I was invited to co-ordinate a wider study for the Foundation in Non-Governmental Youth Field “Pohorski bataljon.” Legendary underground singer-songwriter Marko Brecelj made a call and asked me to coordinate research into independent music and youth venues in Slovenia. Two monographs followed: Do it Yourself: Non-governmental Grassroots Venues, Creativeness of the Youth and Inter-generational cooperation (2011) and On Solid Ground: Analysis of Grassroots Venues and Youth Non-Governmental Field in Slovenia (2012). The latter was a collaborative work, written with active members of various “grassroots venues,” as we named them, from all around Slovenia. 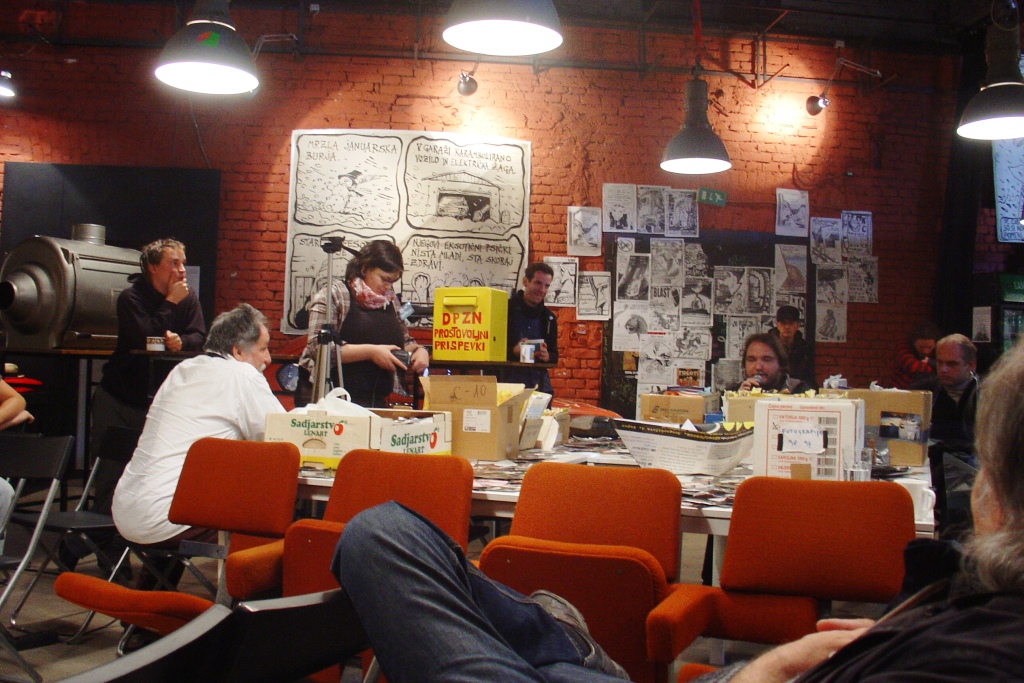 The “carrying backs” of the Foundation in Non-governmental Youth Field, Pohorski bataljon, at the Pekarna, in Maribor, 2012.

What emerged as most important for the active individuals in these venues were their shared values and aims in finding a place for their music-related activities beyond the realms of capital and authority. This does not mean that they would never apply for funds from the state, local municipalities or private sources (though the latter on only rare occasions). It simply means that they are running such underground music venues as “free territories” where they can, at least from time to time, dream their common dreams. Being under constant pressure from the neoliberal state and from capital, these places should be considered as the ‘commons of the present’.

As places not wholly integrated into the predominant systems of power, they offer a kind of haven, or temporary exit, from the reach of the neoliberal state and capital. And here, specifically, lies their ultimate importance. At one point in the research, it came to my mind that what they were constantly describing as “a lot of volunteering”, or “countless volunteering,” was actually very close to the economic activities David Graeber (Debt, 2011) would describe as the first one of three main moral principles in economic relations: communism, exchange, and hierarchy. This moral principle only works when nobody measures participation in an economy. One gives as much as he or she is willing to give and gets as much as one needs. This is the first way in which I will use his term “everyday communism” to describe a crucial basic dimension in the functioning of such venues. Everyday activities in these venues are integrated in systems of “real-capitalism,” however; there is self-understandable generosity in individual engagement. It is obvious that various systems of economic and social relations coexist: “everyday communism” is only one of them, but extremely important for another reason.

The second way I use the term “communism” in relation to music, especially specific music activities at the fringes of the market economy, is philosophical and stems from a long tradition of interpretations of the term, from Ernst Bloch’s writing on the principle of hope, via the student uprisings of 1968 to Alain Badiou’s more recent “communist hypothesis” (2010). Both dimensions are closely related to music in many different ways, especially music that is not necessarily directly “political” or socially “engaged.”

Youth is an almost “natural” common denominator of music, hope and emancipation. Condemned to precariousness and stimulated to “learn the rules,” younger people still find their ways of resistance. The venues we defined as “grassroots” were both “youth” oriented and trans-generational. The former Youth, Cultural, Social, Inter-generational and Multimedia Centre (MKSMMC) in the city of Koper would define itself as a “web of activities of the youth and for the youth”, and it is people that form this web. The centre was established in 1990 and was located in a municipality-owned building in the centre of Koper. Organisationally run by the Association of the Friends of Modest Progress, the centre hosted many varied music acts as well as other events. In 2015, after 25 years, it was evicted from the municipality-owned building and is now located in a small private shop. However, this place is too small to have a music stage.

The majority of venues I am speaking about are organised as clubs or associations. Some are rather informal, and some of them are squats. The most well known cultural squats in Slovenia are Metelkova City and Rog in Ljubljana and Pekarna (The Bakery) in Maribor. In the concert activities that interest me here, they are not essentially different from other clubs around Slovenia. With only some exceptions to the rule, they apply for public funds for their activities, e.g., from the Office of the Youth, Ministry of Culture or from municipalities’ funds. The point is that they were established as clubs or associations, or function as informal communities, at the initiative of individuals. They were primarily interested to find a place for rehearsals, if they had bands, or a place for attending concerts if there was none around. Older venues would emerge as rock venues, younger ones would incorporate electronic music as well; some would even emerge as venues for experimental and improvised music. 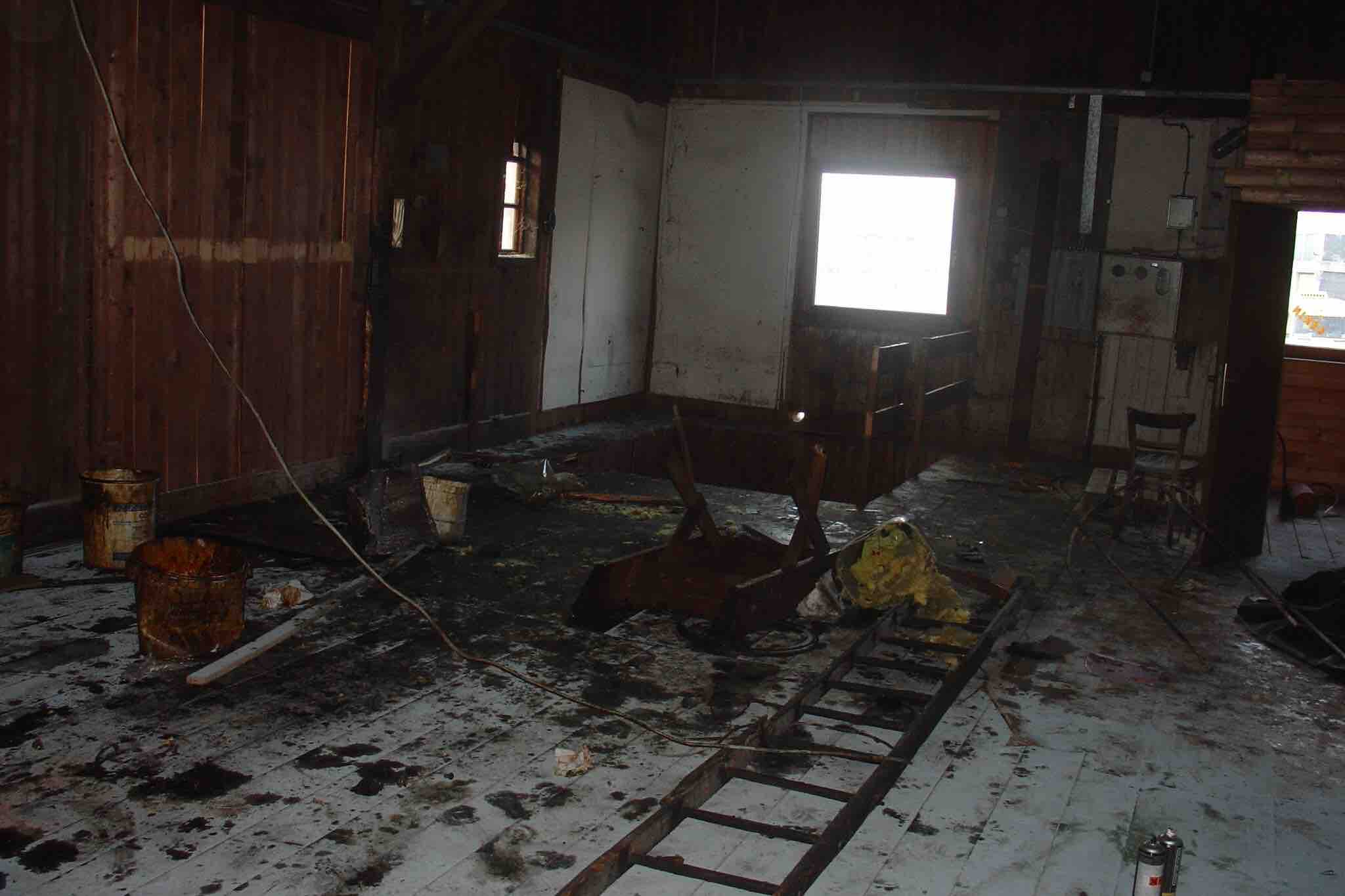 Trainstation SubArt, Kranj. Former squat in 2011. There was a lot of work put into its opening. It is now owned by the SubArt artistic association.

On the other hand, from the late 1990s, local municipalities established youth centres and venues as non-profit public institutions with more rigid organizational structures. As public institutions (zavodi) they would have an executive and a secretariat, which bring with them specific organizational hierarchies. Associations and clubs would also have a leader – a person who is officially responsible for their activities – but this does not mean they would not still develop their own ways of non-hierarchical functioning. 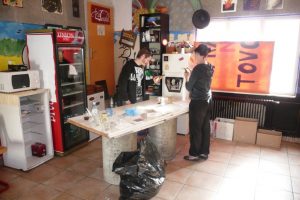 Ambasada Štefana Kovača Marka, Beltinci (‘Embassy of the Štefan Kovač Marko’ – autonomous zone and youth club); occupied since 2002. Views from outside, interior and backyard in 2011.

What is important is that it is not essential if these venues are private, public and common. We can find some private places with impressive non-commercial music programme, and various other venues providing occasional live music, e.g., private bars, pubs, cafeteria, clubs, public music halls and other specialized venues. What I have in mind here are common activities without counting individual contributions for their basic functioning. There are only a couple of examples where venues never apply for public funds, but even they would include some paid activities (e.g., for barstaff, technicians, security, etc.). Nevertheless, there is much more to be done for the functioning of the venues. This becomes ‘common work’ when it is needed, e.g., cleaning, repairing equipment, reconstructing interiors, etc. Levels of professionalization in venues varied, and from time to time everybody would earn some pocket money or get a project job, although in independent grassroots venues there were typically no permanently employed staff or established hierarchies.

And it is exactly these extra “working hours” given to the community that are to be taken seriously, because as soon as volunteers begin to count them, the magic of ‘common work’ does not work out anymore. In such everyday actions individuals reproduce or change realities – or they resist. Their practical activities form specific rhythms of everyday life, and through common work they practice values of self-help, cooperation, rebellion, solidarity, sincerity, freedom, independence, creativity, egalitarianism, and comradeship, etc. In a summary of their values extracted from the research in 2011 they would also mention autonomy, critical stance, being different, and, first and foremost, music.

Work for the sake of the common good is far from institutionalised “volunteering”. It means simply doing something good in/for your own small community. It is usually a couple of individuals, or a band or two, and their friends, no more than a couple of dozen individuals, male and female, who see their venues as a commons. This gives us hope of resisting the “creative destruction” of the present. These new commons are, then, essential for our common future.

All photographs by the author.